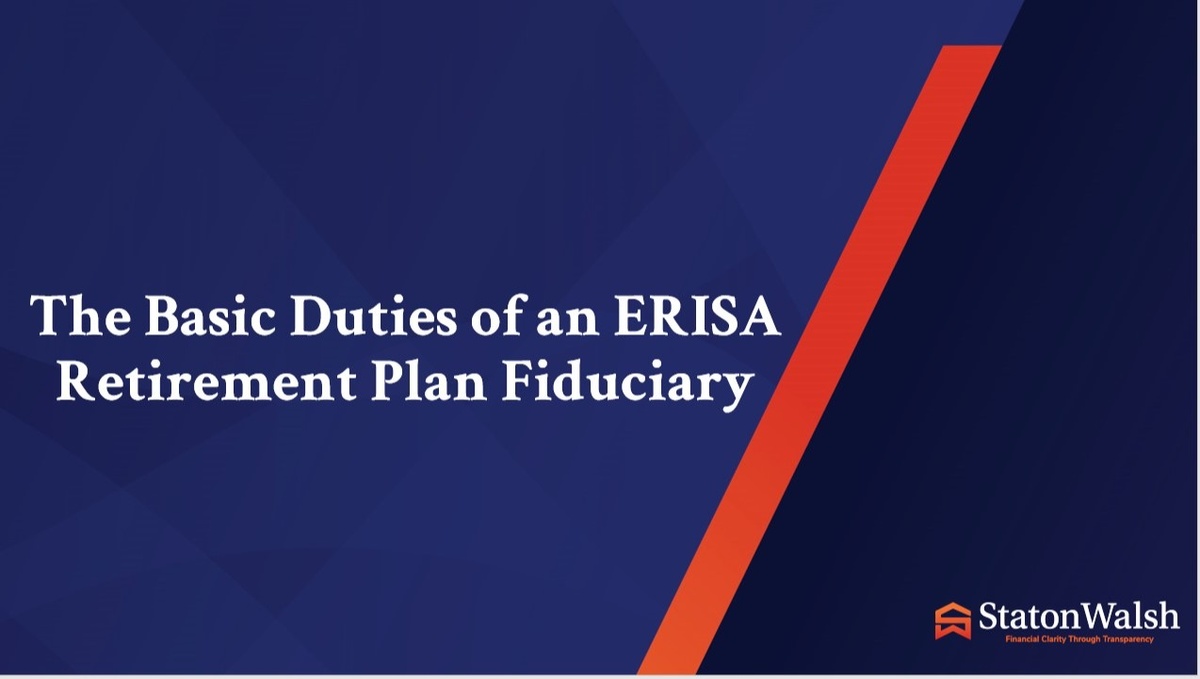 The Basic Duties of an ERISA Retirement Plan Fiduciary

Employer-sponsored retirement plans, such as 401(k) plans, are governed by the Employee Retirement Income Security Act of 1974 (ERISA) and are primarily enforced by the U.S. Department of Labor (DOL). ERISA aims to promote the interests of a retirement plan’s participants and beneficiaries by establishing fiduciary standards of conduct, responsibility, and obligations.

Under ERISA, fiduciaries have several duties, not the least of which is to act solely in the interest of plan participants and their beneficiaries, with the exclusive purpose of providing benefits to them. Failure to do so can put both the employer and its fiduciaries in serious legal jeopardy; therefore, it is critical that all parties understand their duties.

You can become a fiduciary under ERISA either by functioning or being named as one in the plan document.¹ Both types of fiduciaries are held to ERISA’s standards of conduct.

Functional fiduciary—If you exercise discretionary authority over plan management, administration, or assets, or you render investment advice for a fee with respect to the assets of the plan, you're functioning as a plan fiduciary, even if you're not specifically named as a fiduciary in the plan document. Functional fiduciaries could include your plan’s service providers in certain situations.²

The consequences of a breach of ERISA fiduciary duty

The duties outlined under ERISA are basic fiduciary guidelines that must be followed by law. Failure to comply with these duties can result in:

The duties of an ERISA plan fiduciary

Many plan fiduciaries that have inadvertently breached their duty find they’ve done so because they didn't have the right information or support. Because that isn't an acceptable excuse, it's vital that all plan fiduciaries understand—and are capable of—fulfilling their roles as a fiduciary.

ERISA’s fiduciary duties must be adhered to, including:

1 ERISA, Section 3(21). 2 Generally, service providers, such as attorneys, accountants and consultants, performing their usual professional functions are not considered fiduciaries.