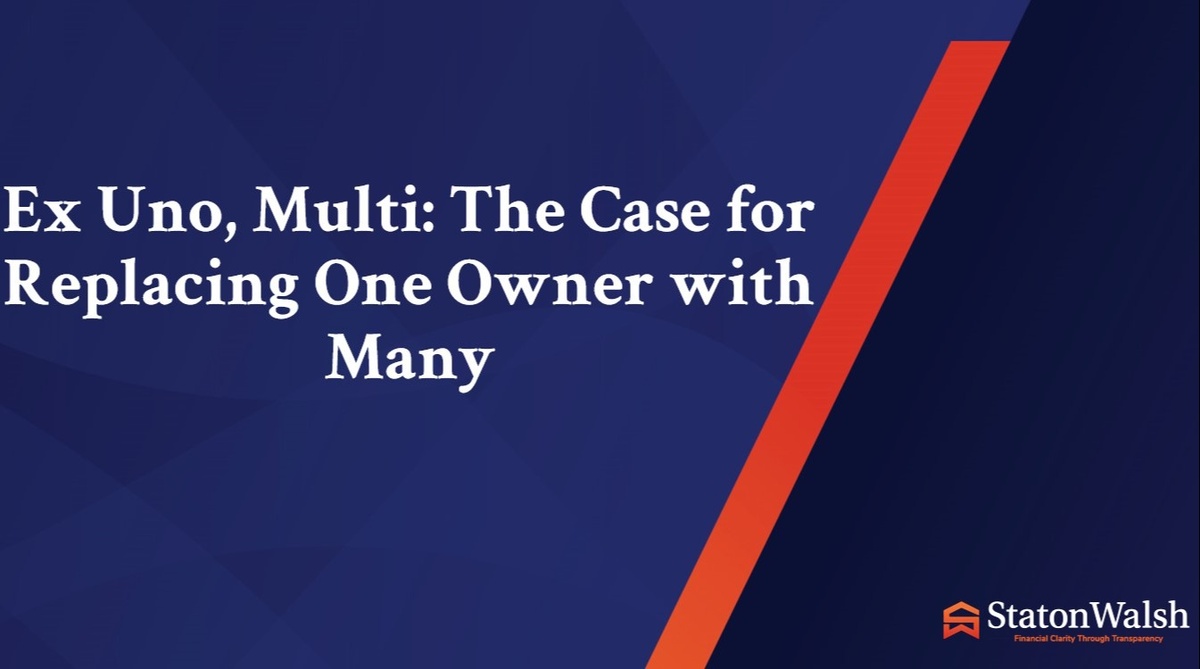 Ex Uno, Multi: The Case for Replacing One Owner With Many

E pluribus unum—out of many, one—is a concept that runs deeply in the blood of many people, especially successful business owners. You likely expect that your co-owners, advisors, and employees all work toward a common goal of business success. However, when it comes time for the business to run without you—by your choice, death, or otherwise—there’s a much more appropriate concept.

Your skill set as an entrepreneur is vast. You’re likely a good communicator who knows how to listen as well as sell. You have a focus that keeps you from making rash, emotional decisions. You know how to learn and how to plan. You understand business processes from marketing to operations.

Finding all of these skills in one person is rare. And if you were to find that person, they’re likely already running their own company. This often means that to find a replacement for yourself to position your business for future success, you’ll need multiple people. Consider Michael Mitel, a fictional but representative business owner who faced this reality.

The Many Hands of Michael Mitel

Michael Mitel’s microchip manufacturing company had grown into a powerhouse. For years, he’d taken the reins of every aspect of the company, from sales to R&D and operations. But growth had begun to plateau, and Michael was finding himself taking longer vacations.

He brought up retirement with his advisor team during one of their regular meetings, but he had a big problem: He couldn’t find anyone who could replace him. He had interviewed successful executives from other companies about taking control, but no single person was able to do all the work Michael did himself.

One of his most trusted advisors, Judy Lee, asked him, “How many other Michael Mitels do you think are out there?”

“None,” Michael said. The wry grin he’d started to flash quickly turned to frustration. “No one else can do this,” he said dejectedly.
“That’s just it,” Judy Lee said. “No ONE person can do this. It’s going to take many hands to replace Michael Mitel.”

At first, Michael shook his head. “Too expensive.”

“Relative to what?” Judy Lee asked. “The company is doing well, but we all know that growth has been flagging.”

“How does having more people fix that?” Michael replied.

“It’s not about having more people per se. It’s about adding the kinds of talent that you bring. Finding one person who can do it all isn’t feasible. But adding several people who have parts of your skill set can solve for that.”

“Not necessarily,” Judy Lee said. “We aren’t looking to hire people willy-nilly. We’ll find people who have portions of your skill set, people who also respect and value the strengths of others. They’ll work together toward achieving your goals so that success doesn’t only rely on you.”

The thought of less work and more profit enticed Michael. He agreed to finding a leadership team that could eventually replace him, under the condition that he had the final say over hirings.

Over the next three years, the business boomed. When Michael took vacations, it was as if he’d never left. Each of the leaders he’d hired was supportive of one another and created a system to highlight their strengths and cover for each other’s weaknesses.

In Year 4, the management team told Michael that they were interested in buying him out for an amount that would provide him with financial independence and generational wealth.
Michael accepted the offer. But his proudest achievement was that he’d managed to find a group of people as dedicated to his life’s work as he was. Out of one person came many, and the many nonetheless worked for one overarching goal: a successful, fulfilling business.

We strive to help business owners identify and prioritize their objectives with respect to their business, their employees, and their family. If you are ready to talk about your goals for the future and get insights into how you might achieve those goals, we’d be happy to sit down and talk with you. Please feel free to contact us at your convenience.

This is an opt-in newsletter published by Business Enterprise Institute, Inc., and presented to you by our firm.  We appreciate your interest.

Any examples provided are hypothetical and for illustrative purposes only. Examples include fictitious names and do not represent any particular person or entity.